In NTSC television (that’s the television format used in Canada, the U.S., and Japan, as opposed to PAL), oldschool Line 21 captions can be translated to high-definition television. (The other terms used for that process – upconversion and transcoding – are not preferred, according to a PDF report.) You might hear of this process as “608-to-708 conversion,” since Line 21 captions are specified by the CEA-608 standard and high-definition captions by CEA-708.

If a broadcaster has taken due care to install the right equipment, whenever old programs are broadcast on HDTV, the old captions will be present. Or if a program is available in NTSC and in high-definition but the producer has been too cheap to pay for native high-definition captions (always the case at present), then the Line 21 captions will be preserved even in the native HD presentation of the program.

So what does it look like? In the case of one product, the results are somewhat unpleasant at times, but not as bad as one would expect.

The EyeTV 500 is a high-definition tuner/recorder (PVR/DVR) for Macintosh systems. It supports captioning, as it must under FCC regulations. (The manfacturer of EyeTV, Elgato Systems, has something of a spotty record in complying with captioning requirements.)

In this case, the EyeTV box uses the Monaco font with rather alarming letterspacing. There’s at least an attempt to render the always-troublesome staffnote character, ♪. We leave to the reader any speculation concerning our use of a talk-show segment in which Ellen DeGeneres interviews Vin Diesel. 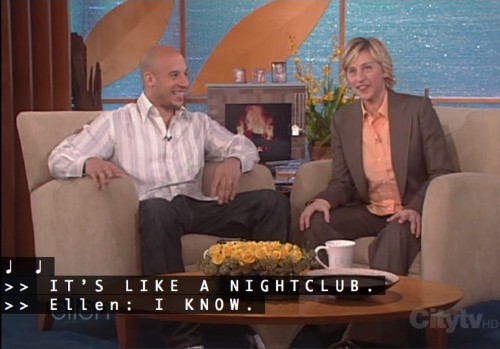 The translucent background (which, according to the specification, is under the control of the viewer) is actually quite pleasing. Bang & Olufsen analogue televisions have the same feature, at a mere $12,000 per set.

We’ll add to this section as we gather more screenshots.